Why do buildings fall in earthquakes? 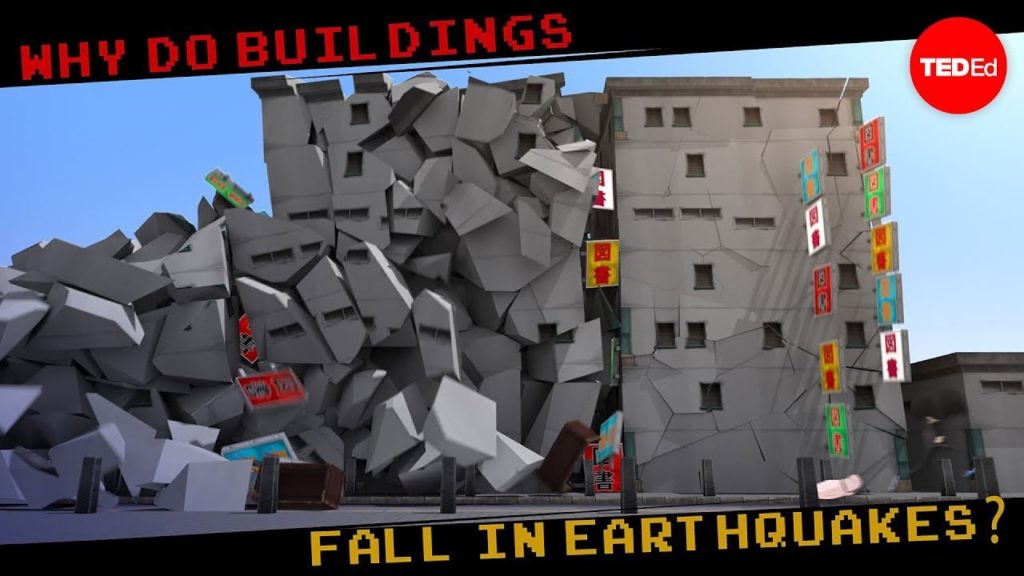 Earthquakes have always been a terrifying phenomenon, and they’ve become more deadly as our cities have grown, with collapsing buildings posing one of the largest risks.

Why do buildings collapse in an earthquake, and how can it be prevented?

If you’ve watched a lot of disaster films, you might have the idea that building collapse is caused directly by the ground beneath them shaking violently, or even splitting apart.

But that’s not really how it works.

For one thing, most buildings are not located right on a fault line, and the shifting tectonic plates go much deeper than building foundations.

So what’s actually going on?

In fact, the reality of earthquakes and their effect on buildings is a bit more complicated.

To make sense of it, architects and engineers use models, like a two-dimensional array of lines representing columns and beams,

or a single line lollipop with circles representing the building’s mass. Even when simplified to this degree, these models can be quite useful, as predicting a building’s response to an earthquake is primarily a matter of physics.

Most collapses that occur during earthquakes aren’t actually caused by the earthquake itself.

Instead, when the ground moves beneath a building, it displaces the foundation and lower levels, sending shock waves through the rest of the structure and causing it to vibrate back and forth.

The strength of this oscillation depends on two main factors:

the building’s mass, which is concentrated at the bottom, and its stiffness, which is the force required to cause a certain amount of displacement.

Along with the building’s material type and the shape of its columns, stiffness is largely a matter of height.

Shorter buildings tend to be stiffer and shift less, while taller buildings are more flexible.

You might think that the solution is to build shorter buildlings so that they shift as little as possible.

But the 1985 Mexico City earthquake is a good example of why that’s not the case.

During the quake, many buildings between six and fifteen stories tall collapsed.

What’s strange is that while shorter buildings nearby did keep standing, buildings taller than fifteen stories were also less damaged, and the midsized buildings that collapsed were observed shaking far more violently than the earthquake itself.

How is that possible?

The answer has to do with something known as natural frequency.

In an oscillating system, the frequency is how many back and forth movement cycles occur within a second.

This is the inverse of the period, which is how many seconds it takes to complete one cycle.

And a building’s natural frequency, determined by its mass and stiffness, is the frequency that its vibrations will tend to cluster around.

Increasing a building’s mass slows down the rate at which it naturally vibrates, while increasing stiffness makes it vibrate faster.

Like a well-timed push on a swingset, each additional seismic wave amplified the building’s vibration in its current direction, causing it to swing even further back, and so on, eventually reaching a far greater extent than the initial displacement.

Today, engineers work with geologists and seismologists to predict the frequency of earthquake motions at building sites in order to prevent resonance-induced collapses, taking into account factors such as soil type and fault type, as well as data from previous quakes.

Base isolation uses flexible layers to isolate the foundation’s displacement from the rest of the building, while tuned mass damper systems cancel out resonance by oscillating out of phase with the natural frequency to reduce vibrations.

In the end, it’s not the sturdiest buildings that will remain standing but the smartest ones.

source of the article

Self healing concrete and asphalt

What if cracks in concrete could fix themselves?

The Future of Making Buildings